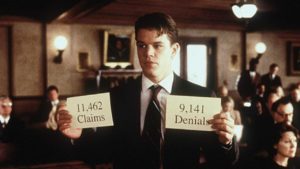 We have all seen the big Hollywood legal movies where there is a dramatic courtroom battle and witnesses, plaintiffs and defendants give their testimony and are grilled by lawyers and admonished by judges.  One of the best films that portray this is The Rainmaker, based on the John Grisham novel of the same name.

Going to court is something few people relish. Indeed, the belief that they will have to go to trial and the fear of having to sit in a courtroom is one of the main reasons people entitled to personal injury compensation don’t make a claim. But the reality is that the vast majority of personal injury cases settle out of court.  Over my 35 year legal career and the hundreds of cases I have litigated, only a small handful have made their way to a court trial and verdict.

If a case has merit and is without substantial controversy, and is prepared well, insurance companies will generally prefer to settle your case than pay their lawyer tens of thousands of dollars to fight you and go before a jury.  Frankly they would rather save those considerable legal fees and add them to your settlement to get rid of your case and gain certainty as to the result, rather than rolling the dice and leaving it up to a jury, where emotions can be a deciding factor.

The kinds of cases that do tend to go to trial are those where liability is up for debate or where more than one party is responsible and no one can agree on the apportionment of fault. Cases that contain speculative income loss claims also tend to be resisted by insurers or claims that are not supported by the evidence.  Where Plaintiffs presenting their claims are not believable or grossly exaggerate their loss, or where our client is not likeable in presentation, those cases stand a much a greater likelihood of going to trial.

So, if you are a level-headed individual, listen to and follow legal and medical advice given to you, and try your best to get on with life, your case stands an excellent chance of settling upon terms that you will be satisfied with. While some insurance companies can be difficult to deal with and can have a reputation of being unrealistic in assessing your case, for the most part, the single biggest determinant of whether your case proceeds to trial or not will generally is up to you, the client.

Along the way, there are a number of initiatives that will assist with settling your case.  Those include events like settlement conferences, mediations and pre-trials, all of which add to the likelihood that your case will never darken the hallways of your local court house. But whatever the options may be, and whatever course of action is required, fear should not be a factor. President John F. Kennedy once said, “Let us never negotiate out of fear.  But let us never fear to negotiate.”

Since 1979, I have litigated cases in many different communities across Ontario, all the way up to the Ontario Court of Appeal.  Over the past 35 years, I have lost cases I should have won and I have won cases I should have lost.  But I assure you, trial is always a last resort and we will not take unnecessary chances with your financial well being or your future.  If you have to go to court, Ashley Gnys Personal Injury Law will be there every step of the way.  “We are in this together”.

*** Grenier Law has a professional working relationship with Ashley Gnys Personal Injury Law and works together on specific personal injury claims where such a relationship will benefit the injured party.